How to Use the Momentum Indicator in Forex Trading

All aspiring traders know the importance of momentum. There are numerous clichés that urge traders to go with the momentum. In the 1960s, the concept of rate of change (ROC), or momentum, became popular with traders, and this popularity has lasted up to today, though it has probably been unseated to some degree by other indicators.

We will be discussing the original ROC momentum indicator, and not indicators commonly referred to as momentum indicators, such as Accumulative Swing Index (ASI), Advanced Decline Ratio (ADR), Aroon, Commodity Channel Index (CCI), Relative Strength Index (RSI), and Stochastics, all of which likewise track the speed of price change over time. Learn how to use this indicator in Forex trading.

Let us look at the momentum indicator found in MT4 and how it can be profitably used. Momentum is calculated as a ratio of today’s price to the price several periods ago (MomPeriod):

MomPeriod is the only variable one can customize, and it is defaulted at 14. For the sake of illustration, we will look at a daily chart of EURUSD with a MomPeriod = 5: 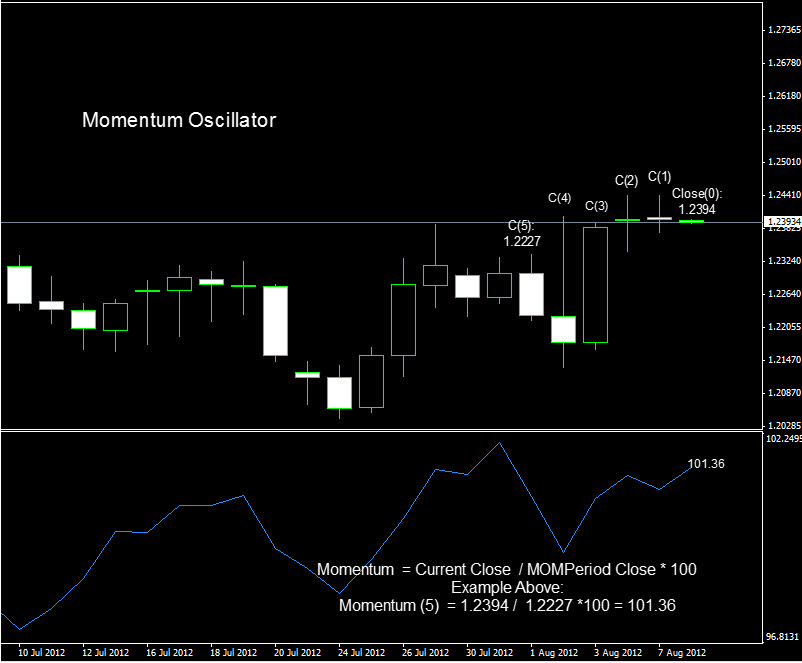 Three ways to use the Momentum indicator:

By itself, this strategy will tend to create too many signals to be profitable. It works best with other conditions or filters, such as the 20 SMA suggested by Alexander Elder (or any period MA deemed suitable via back-testing). For instance, if the mom crosses over 100 from below, and the close is also above its 20 SMA, then a buy signal can be taken. Reverse for the sell signal.

I would also suggest optimizing the MomPeriod for the particular pair and time frame you want to work your system upon. There are maybe other periods more suitable than 14. The default of 14 was chosen to reduce the “noise” of a volatile market without losing much of its advantage.

MT4 Indicator to Momentum with Signal and Alert:

2. Momentum as a Leading Indicator of Exhaustion and Trend Reversal

You can use the Momentum indicator as a trend-reversal indicator similar to RSI or Stochastics and their use of overbought/oversold levels.  BUY when the indicator bottoms and turns up and SELL when the indicator peaks and turns down. As there are no overbought/oversold zones of 80/20 like RSI or Stochastics to determine possible bottoms or peaks, you instead have to test for different Overbought (OB) and Oversold (OS) levels that can work out, as in the table below:

Note: If the Momentum indicator reaches extremely high or low values (relative to its historical values), you should assume a continuation of the current trend. For example, if the Momentum indicator reaches extremely high values and then turns down, you should assume prices will probably go still higher. In either case, only trade after prices confirm the signal generated by the indicator (e.g., if prices peak and turn down, wait for prices to begin to fall before selling).

It is also a good idea to use this indicator in conjunction with a 100 or 200 period moving average. You should buy and sell in the direction of the MA trend, as you can see in the EURUSD H1 chart below:

There are plotted 4 red arrows each to point out when momentum had reached relative low points (bottoms) and turned upwards in the direction of the main trend established by the 100 period moving average. If you had missed getting on board the MA direction when the price crossed above it, the bottoms of the momentum become nice alternative entry points.

3. Momentum as a Leading Indicator (Divergence).

This method assumes that market tops are typically identified by a rapid price increase (when everyone expects prices to go higher) and that market bottoms typically end with rapid price declines (when everyone wants to get out). As a market peaks, the Momentum indicator will climb sharply and then fall off, diverging from the continued upward or sideways movement of the price. Similarly, at a market bottom, Momentum will drop sharply and then begin to climb well ahead of prices. Both of these situations result in divergences between the indicator and prices.

Here is a simple table to define the different divergences:

Let us look at such a divergence in a H4 chart of EURUSD: 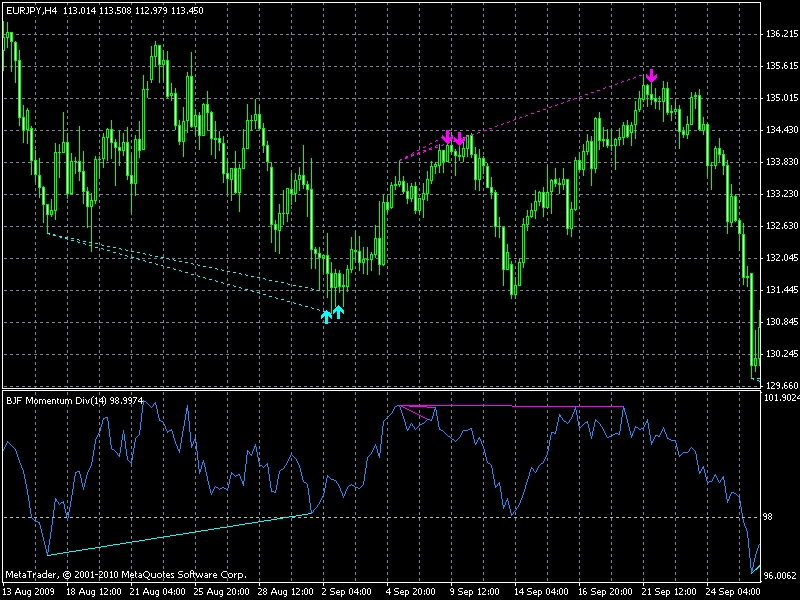 Momentum is perhaps the simplest constructed indicator out there. What can be simpler than taking the current close, dividing it by the close of x bars ago, and multiplying by 100. You get to see at a glance the amount and speed by which prices have changed from x bars ago. And the only variable to optimize is x, or MomPeriod.

As we have seen, there are at least three strategies that can be worked out with this type of indicator:

The first strategy is the most popular of the three, so it might be the best one to start testing. But bear in mind, ROC Momentum has been unsteated in popularity by more sophisticated momentum indicators that followed it, such as RSI and stochastics. This older (simpler) version of momentum has some merit, but you have to examine each of the three strategies related to it with a degree of skepticsm: each must be backtested on different pairs across a sufficient period of historical data to determine if indeed they impart any edge factor.

Is this article helpful? Share it with a friend
HTML Comment Box is loading comments...
Ακαδημία Συναλλαγών Forex
Technical Indicators
What are Forex Trend Indicators and Which Ones to Use
What is a Momentum Indicator in Forex
What is a Volatility Indicator
What is Moving Average
What is Ichimoku Kinko Hyo
What is MACD
How to Use Stochastics
How to Use the Momentum Indicator
What is Relative Strength Index (RSI)
What are Bollinger Bands
What are Fibonacci Retracements
What are Pivot Points and How to Trade Them
Μάθετε Forex
Μάθετε να κάνετε Συναλλαγές Forex: Απόλυτος Οδηγός για Αρχάριους
Τι είναι η Τεχνική Ανάλυση
Τι είναι η Διαχείριση Χρημάτων
Διαθέσιμοι Τύποι Εντολών Συναλλαγών σε Forex
Ποια είναι η καλύτερη ώρα της ημέρας για τις Συναλλαγές Forex
How to Trade Forex: Step-by-step Guide
3 Professional Forex Strategies
How Fundamental Analysis Works
How Support and Resistance Works
How Trend Analysis Works
How to Analyze Fundamentals
Why do Most Traders Lose Money in Forex
What are Forex Rebates
Introduction to Automated Trading
Χρηματομεσίτες Forex
Top 5 FX Brokers 2021: With Customer's Reviews
Top US Regulated Forex Brokers
Financial and Forex Regulators
Finding the Best Forex Broker: 7 Key Factors
Benefits of Micro and Nano Lot Brokers
Υπολογιστές & Εργαλεία
Άρθρα Forex
MQL4
Training Videos
Miscellaneous
Σύνδεση
Εγγραφή
Ή
Σύνδεση
Ξέχασα τον κωδικό πρόσβασης
This site is protected by reCAPTCHA and the Google Privacy Policy and Terms of Service apply.