What is the Best Time to Trade Forex 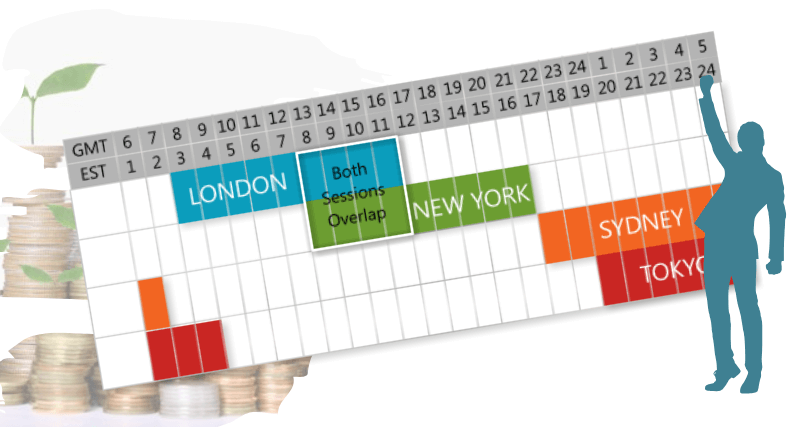 It is great that forex is a market that can be traded around the clock, 24 hours, 5.5 days a week, 12 months a year. Being open all day and most of the week brings to the market a greater liquidity than otherwise, and it gives traders from around the world the flexibility to trade when they want. They can trade as little or as often as they want, during their business hours, after work or even in the middle of the night.

However, there are drawbacks to having the market being open 24-7. It is nice to have the flexibility to trade at any time, but we are also human, which means that we must sleep, eat or relax, and cannot be monitoring our positions all day and all night.

There will always be times of missed opportunities or jumps in price that will move against established positions when we are not around. This is a human limitation, and that is why in forex it is advisable to trade with an Expert Advisor (EA) that trades for us 24-7, or barring that, it is advisable to choose the best time to trade based on one’s own available time and strategy logic. The best time to trade Forex is when trading volumes and volatility levels are large enough to fill your order. Find out when you should not trade.

Although there is always liquidity in each session, they are not created equal: there are periods when price action is consistently volatile and periods when it is muted. Moreover, currency pairs exhibit varying activity over certain times of the trading day in relation to the demographics of the participants online at the time. In the 24-hour fast-paced Forex market timing is critical and choosing the best time to trade can add to one’s profit potential.

The best trading hours are the times when volume and volatility levels are highest. High trading volume means that more lots of a particular currency pair are being bought and sold and high volatility means that the currency pair is moving fast and trending quickly. High volume and strong volatility cause large pip movements during the best trading hours. Moreover, the spreads become narrower during high volume trading hours, and narrow spreads mean lower transaction costs. Let us look at a table of the sessions once again, oriented around GMT and EST:

European Session: 8 am to 5 pm GMT

Given that 34.1% of the world daily turnover occurs in United Kingdom (London) and that another 7.5% occur in the nearby time zones of France, Germany and Denmark, it is easy to see why the European session is one that should not be ignored.

A large number of market participants has made London the world’s most volatile market for trading currencies. And it links with both the Asian and American sessions. The problem for US trader is that they might have to get up very early (or stay up very late) to trade a European session that runs from 2 am to 12 pm EST.

Of course, this session is ideal for the European trader, and it is also not too bad for the Asian Trader who can trade the European session during his evening (3:00 PM to Midnight, Hong Kong Time). Currencies like the Euro, British Pound and Swiss Franc are most active during this session as traders from the European countries use their domestic currency in their foreign exchange transactions.

Given that 16.6% of the world daily turnover occurs in United States (NYC), and that most of the world financial markets seem to follow what trends and numbers that are put out by Wall Street, it is likewise easy to see that the United States session is highly important. Most can trade this session, providing they do not have to go to a job during the day. Europeans, however, need to be the ones to stay up late to trade this session, and the Asians are probably already in bed.

The most explosive time for trading is when the European traders are trading alongside US traders in the 4-hour overlap between the two sessions (8 am to noon EST). It is the time when the world’s two most active trading centers cross — as the European session is closing and the US session is opening. It is a small, but very active, window that some currency traders call the “hot zone”.

This overlap also coincides with the release of important economic numbers. Because of the overlap and economic importance, this period represents the times of greatest liquidity and movement in the markets, so pay careful attention to them. Trading EUR/USD and GBP/USD would give the best results during this overlap.

In the morning (for Europeans), from 8 am GMT to about 9 AM GMT, there is a 1-hour overlap between the Asian and European markets. Important economic numbers from both continents are also released at this time. Unsurprisingly, the GBP/JPY pair becomes the most volatile at this time.

What Hours Should You Avoid Trading Forex

The least active times to trade are the quiet zones of the Sydney and Tokyo Sessions, which is a combined 10 hour stretch of time. Unless you are scalping during this session, hoping that your scalping system can take advantage of the lower liquidity, it is a good time to take a break and rest.

Best Days of the Week to Trade Forex

Forex allows us to trade 5.5 days a week, including Sunday, but that does not mean that every day gives an equal trading opportunity. Some days are more desirable to trade, in terms of volume and pip range, while others are less desirable. The rule of thumb regarding days of the week is that the middle days (Tuesday, Wednesday, Thursday) receive the most action. So if you want to trade just three days a week, these would be the best days.

Days to be Cautious About When Trading Forex

Sunday: This is the day when everyone is still enjoying their weekend, so don’t expect much movement here, unless there has been a critical news announcement during the weekend. Sometimes there are trends continuation or reversals happen on Sunday, depending on what had happened at the end of Friday.

Monday: Though trading has been underway since Sunday, Monday still represents less of a pip-range than the middle three days. It is still early week and traders are still waiting for the economic news and numbers to come out during the week. You can trade Monday as it can be still very profitable and you don’t want to miss out on the beginning of a move. But watch out for corrective moves against the main trend on Monday that later get reined in by Tuesday or Wednesday. These can lead to false trades.

Friday: This is virtual half-day because trading is busy until 12:00 pm EST and then nearly dies down in activity until it closes at 5:00 pm EST. There are still trading opportunities that can be found during the first half of Friday. But one should be on guard: this can be the day of reversals from the main trend. Be particularly on guard the second half of Friday, as the volume can drop way down, causing spreads to greatly increase.

Other Days you Should be Cautious of:

The whole year can be divided in thirds, starting with the three terrible months of Summer, the four best months of Autumn, and the four decent months of
Winter-Spring.

What is the Reason for This Divide?

Any holiday period represents drying up the trading volume, and the months following these vacations represent a refreshing return to trading, like rain after a drought.

The Big Drought: The Summer holiday months of June, July and August

Research data from the S&P indicates that the summer months provide weak returns for most financial markets for many countries in Europe. The old adage traditionally used across London trading floors ‘Sell in May and go away’ still holds its own, according to an analysis by S&P Indices. It is the last four months of the year that contribute most to full year returns.

The theory behind this maxim is that the summer months are characterized by sluggish performance or a loss. By selling out your holdings in May, and reinvesting them only when the summer is over, you protect your portfolio and potentially achieve better returns. By analyzing the monthly performance of sixteen European markets in the S&P Global Broad Market Index over the ten year period from January 2000 to December 2009, S&P has shown that this trading strategy still holds good across Europe.

The last four months remain the most important for contributing to full year returns, meaning that even after experiencing a poorly performing summer there is still the chance to improve returns.

August is the Worst Summer Month

The summer, especially August, is the worst period to trade with many institutional traders in Europe on holidays and North America on vacation as well. That leads to less trading and big price swings. The best strategy many suggest is to simply go on vacation and resume trading when September comes around.

Who have often traded during the summer, regretted it after. The currency markets become very erratic and unpredictable.

If you have to trade during the summer, be ready for the sideways action. Trade a range based system (also called trend-fading strategy). Sell a currency at the top of its range, buy at its bottom, rinse and repeat. Or zoom into smaller time frames (M5 or M15) to trade the mini-trends.

Sooner or later the sideways trend breaks, and that is usually right after the Labor Day holiday in the US, everyone takes a break and summer is unofficially over after that.

The reason why the best months to trade occur just after summer, from September to December, is because these months represent a surge of trading activity after the summer holiday lull. If one were to choose just a few months to trade, these would be it.

There is a “Winter Month” for slow trading. The second half of December has the same low volumes as August. The weeks around and past Christmas are as slow as August and the beginning of January is not that great as well.

Just after the second holiday period in December, there is a pick of trading activity that lasts from January to May. It may not be as powerful a trading period as the one in Autumn, but it does provide many months of an excellent opportunity.