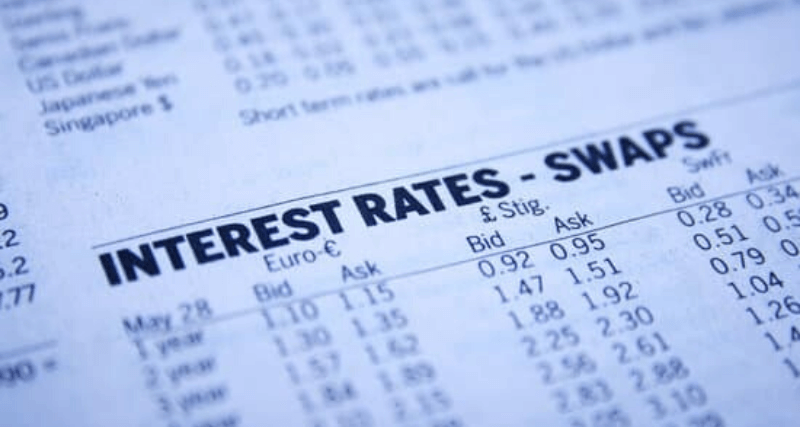 A swap in forex occurs if you are holding an open position overnight. Your account will be either credited or debited, depending on the trade direction, and traded pair.

Exactly at 10pm GMT (time might vary with some brokers) if a trader is holding an open position on the FX market overnight, the trading account will be either credited, or debited.

This value is an interest charge on the full size of the open positions, depending on the established account margin and position in the market. Depending on the interest-rate differential, traders may pay or receive the interest fees, also known as rollover fees.

The rollover happens fees are charged when an open position from one value date (settlement date) is rolled over into the next value date. Rollover transactions are carried out automatically by the FX brokers if traders hold an open position past the change in value date.

Behind the scenes, the settlement occurs in two business days. Thus, if it is Monday before 10 pm GMT, currencies are trading for value on Wednesday. After 10 pm GMT on Monday, the trade date becomes Tuesday and they are traded for value on Thursday.

Why Does this Interest Credit or Debit Occur?

Because when an investor is trading currencies, in reality, he/she is trading cash. When a trader goes long on a currency, it is like holding a deposit at a bank, and like a bank account, the trader would expect to earn interest on the deposit.

On the other hand, when a trader goes short on a currency it is like borrowing from a bank, and the trader would expect to pay interest on the loan.

Whether the trading account will be credited or debited depends on two factors: 1) whether the trader is holding a long or a short position; and 2) the interest rate differential between the two currencies in the traded pair.

Trading in the currency exchange market always involves borrowing one currency to buy another, thus, interest rollover charges are part of forex trading.

Interest is paid on the currency that is borrowed, and earned on the one that is bought. In effect, traders will earn or pay interest depending on the direction of their position.

If a trader is buying a currency with a higher interest rate than the one borrowed, the net differential will be positive (i.e. the GBP/JPY) – and the trader will earn funds (be credited) as a result.

If a trader is selling a currency with a higher interest rate than the one borrowed, then the net differential will be negative, and the trader will end up paying (be debited) for that rollover.

To find out the current interest rates from the major central banks (and the next scheduled interest rate decisions), we suggest a quick look at the Fxstreet website, where interest rates are presented in an easy-to-read table, like the one below (accurate as of March 2021): 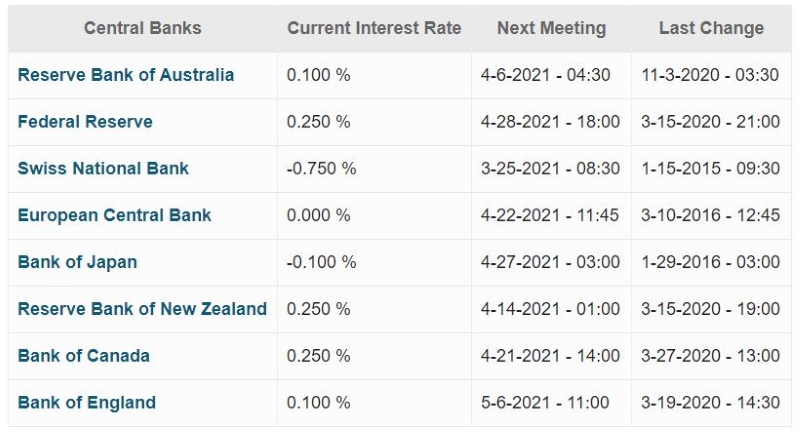 From the table above, traders can gather that the Australian RBA rate of 0.25% is significantly greater than the negative rate of -0.10% of the Japan BoJ.

For investors, this would mean that one would earn more interest in being long Australian dollars and being short the JPY (i.e., long AUD/JPY).

Traders should bear in mind that the rollover charges are carried out automatically by the forex brokers if, and only, a position is still open at 10 pm GMT and hold past the change in value date.

Let’s now see a practical example of the rollover charges calculated in USD. Let’s imagine a trader goes long 1 lot (100,000 units) AUD/USD and the AUD/USD quote, at rollover time, is 0.7750.

How much swap should the trader pay, or receive, at rollover time?

So, in this hypothetical example, a trader holding a 1 lot long AUD/USD would receive a credit of 9.55 USD on its trading account at rollover time. Bear in mind that the example above is just an exercise and swap rates can change on a daily basis, due to the market fluctuations and the currency pair quote.

If you want to check the rollover rates for several currency pairs, across multiple brokers, try our cool Forex Broker Swaps Comparison Tool and check out if you will be credited or debited a swap rate with your broker. It looks like this:

If you want to know the rollover rate of your individual currency pair, some forex platforms such as FXCM’s TradeStation publish these particular rates.  However, if you are working with the MT4 platform, you can apply one or both the following MT4 information indicators to your charts.

A picture of both these handy MT4 swap indicators applied to a EUR/USD daily chart looks like this:

Both MT4 indicators are valid options to see the swap rates for the traded pair,. But these utility indicators are also a great option to keep an eye on trading ranges, and above all, with the IceFX TradeInfo indicator, it can be used to help traders managing their position size and risk, and to keep tabs on the trading win and loss rate.

This is probably not fair but it is the way the brokerage game is set up. If your trading history were to present an equal number of longs and shorts carried out over more than 1 day, you would probably have an overall negative swap charged on the total of all your trades. It may not come out too much but it is something you have to end up factoring as a cost of trading.

You may also discover that some brokers will incur a negative swap rate for being either long or short a currency pair. If you see a broker doing this, you might want to reconsider having an account with him.

There are at least three ways you can avoid paying swap rates.

Trade in Direction of Positive Interest.

You can go trade only in the direction of the currency that gives positive swap. This is generally not recommended unless trading in that specific direction has been the most favourable direction in terms of back-tested and forward testing trading results.

Trade only Intraday and Close Positions by 10 pm GMT (or the rollover time of your broker).

Open a Swap Free Islamic Account, Offered by Some Brokers.

This is an option offered to Muslim customers, though in reality non-Muslims frequently choose the category if offered. These particular accounts are run in full compliance with Islamic beliefs and the policy of no interest to be paid upon business transactions. If you believe you will be having many overnight transactions, you might consider opening a swap free Islamic account.