How to Use Stochastics in Forex Trading 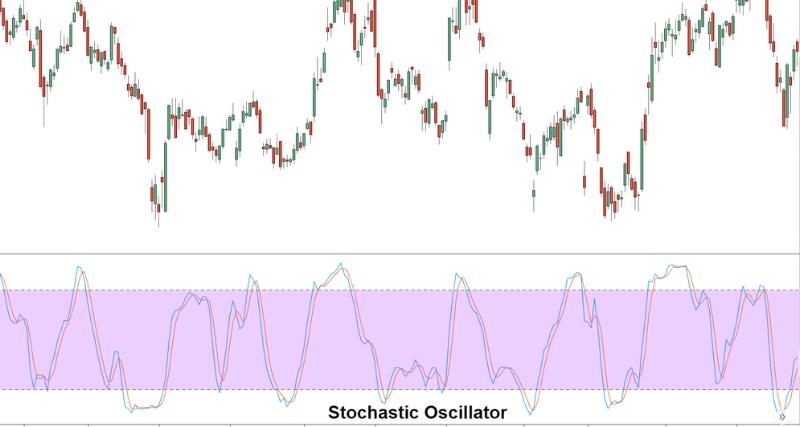 Stochastics measures the momentum of price. If you visualize a rocket going up in the air — before it can turn down, it must slow down. Momentum always changes direction before price.

Stochastics are among the most popular technical indicators when it comes to Forex Trading. Popularity is difficult to quantify, but according to a quick review into the free indicator/EA repository of desynced.net/fx/eas/, it is the fourth most popular indicator used as a basis for EA construction:

The late George Lane, a professional trader for 50+ years and widely respected technical analysis educator, developed this indicator in the late 1950s in order to measure the current close relative to the range (high/low) over a set of periods.

Stochastic is a momentum oscillator, which consists of two lines:

The trigger levels are added to the chart at 20 and 80. When the Stochastic lines are above 80, the market is considered overbought, and when below 20, oversold.

Traders have adopted stochastics to measure trend direction, trend strength, and trend change. Here are the levels and their importance:

We are most concerned about the two signal methods:

Each method is simple to learn and use.

Basically, this is the crossover of the faster moving main Stochastic line (%K) over or under the slower moving Signal Line (%D). This crossover looks similar to moving average crossover, wherein the trade signal is derived from the fast line crossing the slow line.

Could be fixed stop-loss determined by back-testing, or simply an exit via the opposite trade signal: 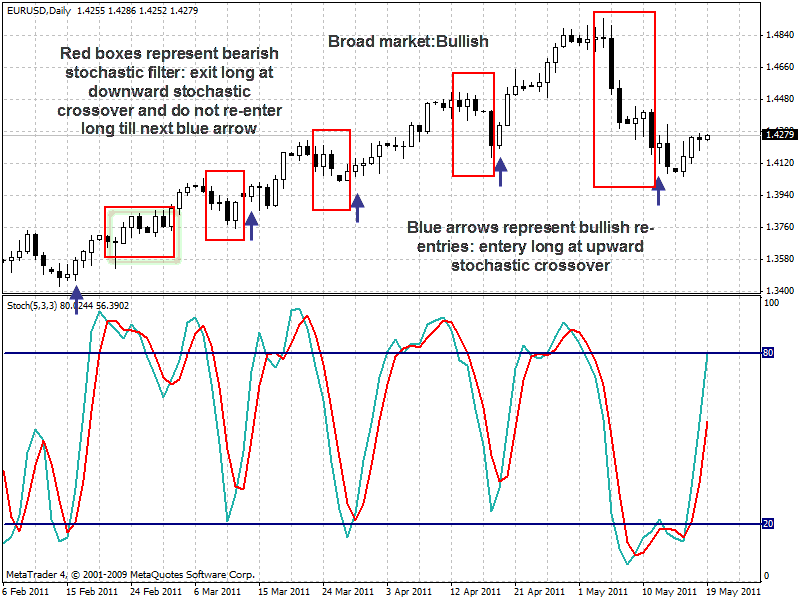 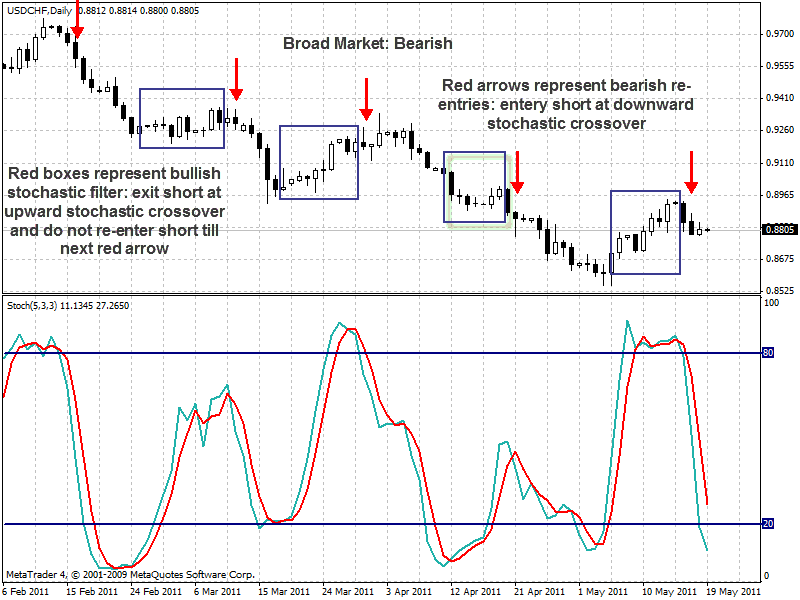 From February to May 2011, the USD/CHF was in a strong bearish downtrend, and if one would have played the crossover method, it would have been smart to only trade the short side of the crossover (indicated by the blue arrows), and exiting and staying out of the market at the long side of the crossover (indicated by the red boxes). There would have been 5 decent sell signals to take advantage of different downward moves on overall downtrend market, and the buy signals (taken only as exits) would have had you exit each of these short trades with nice profit, at the same time helping you avoid some bullish corrective phases that would have ate into your profits.

As we can see from the above illustrations, adding two filters to stochastics signal crossovers enhances performance:

There are a number of different parameters and time frames that will work for any pair. Some traders have made effective use of a larger parameter set (21,9,9), while others have shown more promise with the smaller parameter set that is the initial default in MT4 (5,3,3). Some prefer to trade with the daily chart and others with the H1 chart. The choice involves a balance between sensitivity and reliability. Generally, the smaller the stochastic parameters or time frame, the faster it will react to market changes, and the more crossovers will be shown. The downside is that these crossovers can be less reliable. In contrast, the larger the stochastic parameters or larger the time frame, the slower is the reaction time, with the downside being less trading opportunities and upside being more reliable trading signals. Every trader should back-test their stochastic system using different parameters values and different time frames to see which sets and times perform the best.

Could be fixed stop loss and take profit determined by back-testing, or simply an exit via the opposite trade signal:

The bane of this counter-trend strategy is that the market continues to trend, and thus there are a couple of filters that need to be implemented: 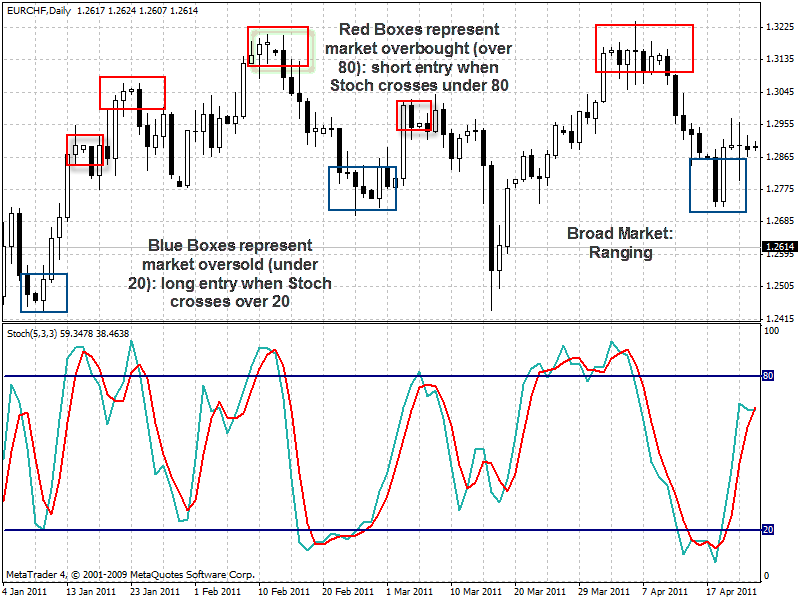 Since the EUR/CHF is generally a range-bound pair, it is a good one to illustrate how one could have bought and sold whenever Stochastics entered and left the overbought/oversold zones. Between Jan to May on the EUR/CHF daily chart, there have been three times wherein stochastics had entered into the oversold zone of 20 and then left it, resulting in buy signals. It was the first buy signal (a brief touch of 20) in January that would have won hundreds of pips, and Stochastics traders could have easily missed this if they were first expecting the line to fall under 20. The short plays were more frequent and powerful. There were five nice short signals initiated when the stochastics entered the overbought zone and left it, and one could have made hundreds of pips on each of them. 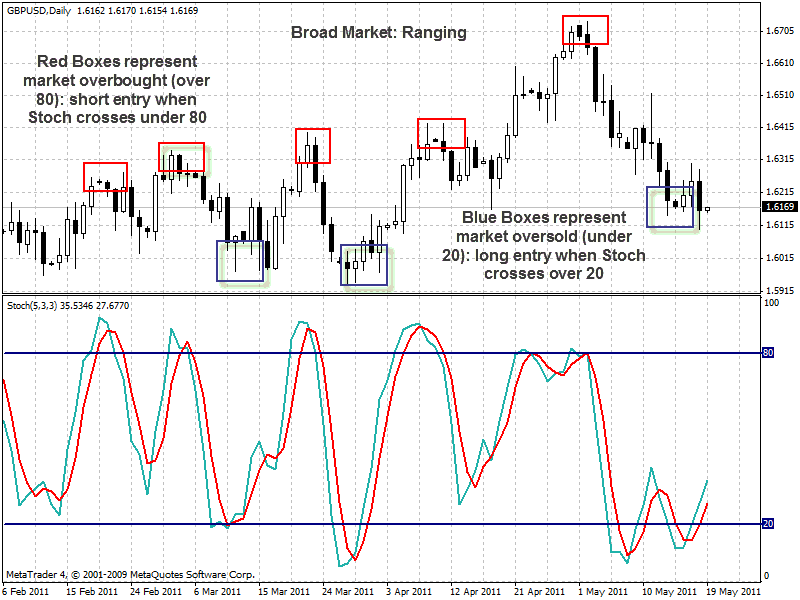 Between February to May 2011, the GBP/USD had been stuck in a 400 range between 1.6000 and 1.6400, and trading both sides of this range, taking buy trades in the oversold region and sell trades in the overbought region, would have resulted in a nice accumulation of pips. Notice that there was a breakout of the range towards the end of April when price headed up to test 1.6700.

In many markets such a breakout would put a lot of pressure on the preceding short signal that had entered in the overbought zone. However, in this case, the preceding short signal (the fourth red box on the chart) would have entered near the top of the range, at 1.6400, with the market soon after making a low of 1.6169 (250 pips below) before it rocketed back up and through the top of the range.

One could have won with this trade if the strategy had a profit target of 200-250 pips, or at the very least exited at a breakeven level prior to the market reversing and breaking through the range. It is with proper back-testing that one can determine the best take profit and breakeven levels for a given currency pair, just in case the market does break the range you are intending to exploit with the overbought/oversold method of Stochastics.

How to Use the Momentum Indicator

Highest forex rebates on the net
Get cashback on every trade!
Automatically reduced spreads at many brokers
35 top global brokers supported
Visit RebateKingFX